“We are in a systemic crisis. No country in Europe is out of the consequence of the financial crisis, even France and Germany“, – says Catherine Trautmann, former mayor of Strasbourg and French euro-deputy. She speaks about Greece, Europe’s crisis and how it might affect South Caucasus countries in their way towards European integration.

“Europe is facing worst crisis since the Second world war”, – said Germany’s prime minister Angela Merkel a couple of days ago. The eurozone has appeared on the verge of a collapse when Greece, Ireland and Portugal became unable to borrow money on free debt market and were forced to ask money from the international creditors.

Being one of the fastest growing economies of Europe in 2000s, Greece now became the most affected by crisis economy in the eurozone. Greece’s average budget deficit in 2001-2008 consisted 6.2% while the maximum level, which is accepted for Eurozone countries is 3%. Now Greece’s debt is more than 300 bln euros, which makes a risk for the Euro stability. But the crisis signs are also seen in other countries: Italy, the third economy of an euro area also faces threat of debt crisis.

Catherine Trautmann, 59, is a former Minister of Culture of France and now Member of the European Parliament for the East of France. Member of the Socialist Partyn part of the Party of European Socialists, she was elected as mayor of Strasbourg in 1989, re-elected in 1995, then defeated in 2001. 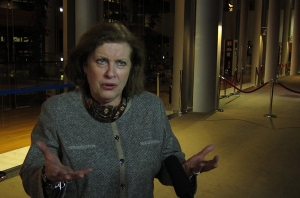 Crossed interview with foreign correspondents in Tbilisi, Matthew Collin and Régis Genté, about South Caucasus, freedom of speech and their daily work. 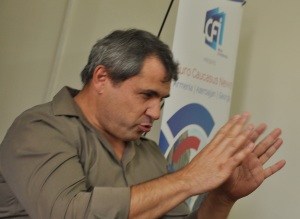 Matthew Collin, 47, is working in South Caucasus as a correspondent for Agence France-Presse (AFP). Living in Georgia for about 5 years, he used to work for BBC, Al Jazeera, The Guardian and the other mass media organizations.

Regis Genté, 43, lives in Tbilisi where he works since nearly 10 years as a freelance journalist, “without any tie”, as he likes to describe. His features and news about Caucasus and Central Asia came on air on Radio France Internationale and published in Le Figaro as in other French media.

-What are the main difficulties to be a foreign correspondent? 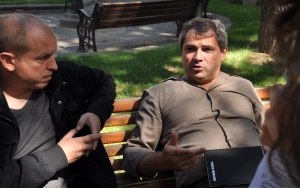 M.C.– Maybe working in the region which is not widely known in the rest of the world. Sometimes, it is also difficult to sell stories from here to European media. When it comes to international news, Caucasus is not the number one region in the world. At least less than other places, where events like war, riots or natural calamity happened.

R.G.-For me the most difficult is getting a very accurate background on the story I cover. For example, it is really interesting to understand who is lying, who is not lying. Our job is to interview liars all day long and to try to find the truth that lies behind. Of course, everybody is lying, also in Europe and Asia. But maybe it is more difficult to discover here, because we are less familiar with the mentalities or the context.The other difficulty is to replace any story I cover in South Caucasus into a wider global context. Sometimes I know I have an interesting story but editors in Europe don’t want it. Because they think it is too local and will not be interesting for our people. So I have to convince them, to replace it into a global context.