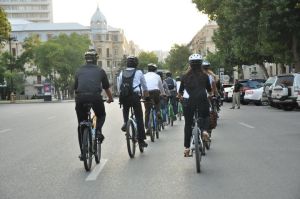 In the French city of Strasbourg, everything is done for bikers. A very green attitude that contrasts with the situation of cycling in Caucasus.

The first thing that amazed us in Strasbourg was the lack of private cars we used to see in the streets of Baku and Yerevan, and the great quantity of bicycles instead. At first, we thought: “these people are crazy !”. We noticed special parking stations for bicycles,the ‘Velopark’, around 500 kilometers of cycling paths- the largest in France-, public bike rental service and interactive maps of bike routes like Bikely.com, to cycle throughout the whole city. 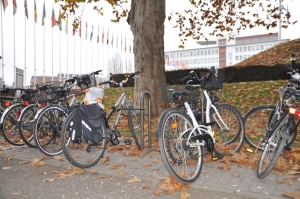 Cars are for example banned from the city centre, people of every age are cycling everywhere, even near the official buildings like the Council of Europe. Official statistics talks of 130 000 bikers on a population of around 300 000 inhabitants.

And each year, the Strasbourg Festival of the Bike (Fête du Vélo) is held annually in September and celebrates the two-wheeled mode of transport and sport. It seems like that locals start driving from the childhood, soon becoming as usual for them as breathing and speaking.

Strasbourg as a ‘bikers paradise’ was largely encouraged by the municipality, in conjunction with the public transports network, tram, bus and train systems, to make cycling safe and convenient. A pioneer in sustainable mobility and easy travel, the Strasbourg Urban Community has even created the service called ‘Vélhop’, allowing the sharing of bikes available to all. 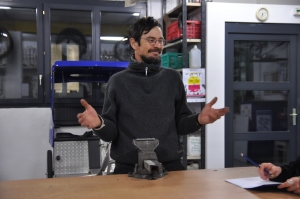 In Baku, Azerbaijan, the situation is very different. There are not special roads, pathways, nor stations for bicycles. Since 2008, the Green Bikers Club, an environmental NGO represented by Elshan Nuriyev tries to « contribute to sustainable development and protection of ecosystem by strengthening environmental education and activities in Azerbaijan ». Green Bikers Club has its branches in Ganja, Sumgayit and Agjabedi and the total number of its members reaches 2 000 persons. More than 500 persons are actively involved in environmental seminars and campaigns organised through Azerbaijan.

The organization’s main activities include the implementation of projects and campaigns focuses on raising « ecological consciousness » and increasing civic responsibility to protect environment. Advocacy campaigns for the construction of green roads and pathways, as well as development of alternative energy sources were launched, as well as the promotion of « ecologically friendly transports », like bikes and tramways.

In Strasbourg, not only the municipality but also the citizens make the tradition of cycling alive, so that the city is called the “Kingdom of Bicycles”. The association « Velo Station » teach people how to repair the bicycles by themselves. Ian Conold, the representative and one of the oldest members of the association tells, that « people of very different professions are gathering to help newcomers to repair their old bikes. Women are a big part of those bikes fans. Cyncling is also a good possibility to find new friends, have a fun and in the same time repair their transport, not spending too much money. »

For cycling – liker’s from Caucasus it still remains a dream such conditions, good roads and not crazy car drivers but people do their best to cycle, to make bike campaigns, as everyone wants keep the ecology pure of pollution.

In Erevan, they want to spread and develop cycling movement in Armenia. Each Sunday, they propose different destinations in Armenia. But the “Bicycle+ NGO” that gathers around 1600 people is still calling themselves a « group of crazy cyclists! ».